In the morning, Pharaoh went out to the water’s edge on the bank of the Nile River. Moses and Aaron came across to him as he stood on the river bank. They said to him: ‘The Lord God of the Hebrews has sent me to you, saying, “Let My people go, that they may serve Me in the wilderness”; but indeed, until now you would not hear!”. They then told Pharaoh what would happen as a result of his refusal to release the Israelites – the river would be turned to blood. God then commanded Aaron to lift the rod in his hand and strike the water.

Therefore, on that day, the first plague was started. There were nine more plagues to follow because Pharaoh’s heart was hard and he refused to let the people of Israel go.

In other articles, we will consider two other memorable events related to the man called Moses. We will consider Moses at the Red Sea when the waters were parted and we will also look at Moses and the burning bush. The best order to read the three articles:

In this article we are going to consider another memorable event in the life of Moses – this time the ten plagues that struck the land of Egypt.

Pharaoh was the supreme leader in Egypt. Over the years there had been many Pharaohs (leaders). Who was this pharaoh of Egypt that Moses and Aaron spoke to? There is disagreement amongst scholars as to which leader he was. Some say he was Ramses II (1279-1213BC), some say Merenptah (1213-1203BC), whereas others say Seti I (1294-1279BC). Careful examination of the events recorded in the Biblical record along with archaeological analysis suggests to some that it was the young leader Tutankhamun (1336-1327BC). The photo at the start of this article is Ramses II.

Events leading to the ten plagues of Egypt

What lead to this great confrontation between Pharaoh and Moses/Aaron and the one they represented “The Lord God of the Hebrews”?

For a long period the Israelite people had been slaves of the Egyptians. It was God’s purpose that they be freed from Egypt and then become a people who obeyed and worshipped Him. As slaves in Egypt they were probably more familiar with the gods of Egypt than the one true God. Therefore God knew that He must make them aware of Him if they were going to obey Him.

The Egyptians were an idolatrous people and did not know the God of Israel.

The Egyptians were one of the most powerful nations on earth at that time. But as we will see, there is a long struggle between Pharaoh and God. In this struggle the God of Israel would humiliate Pharaoh and the Egyptian nation. He would do this by the ten plagues.

In the article “The bush that was on fire but didn’t burn up” we saw that Moses had been in isolation for forty years. God spoke to him (through an angel) and told him to travel to Egypt and be the leader of the Israelite people. He was instructed to lead them out of Egypt to the Promised Land. He lacked confidence to do this leadership role on his own so Aaron was instructed by God to help Moses. Aaron was the brother of Moses (Exodus 6:20)

As a result, Aaron was promised to be his spokesman and the honour of leadership was divided between them. Aaron travelled to meet Moses in the wilderness. In Midian, Moses took his wife and two sons and put them on a donkey and then they headed towards Goshen in Egypt. God told Moses what he should say to Pharaoh:

When they arrived in Goshen, Moses and Aaron meet the elders of Israel. As a result, the people of Israel believed and bowed their heads and worshipped God. But the biggest challenge was that they had to face Pharaoh and tell him that he must let the Israelite people go. They were to no longer be slaves in Egypt.

When Moses meet Pharaoh, he spoke the words God told  him to say (see the quote above). Pharaoh refused to be moved by Moses words and he defied God. As a result, by the hand of Moses, God brought ten terrible plagues upon Egypt. These are the ten plagues:

Ten times God spoke to Moses in Egypt to cause a land that was fertile even during famine, to return to desolation and ruin. The fruitfulness of the land gave way to barrenness as flies, hail and locusts attacked plant life, while lice, Murrain disease, boils and hail attacked animal life. The life giving sun became darkness and life returned to death. God who has the power to create has the power and the right to destroy His creation.

As mentioned above, before the plagues had been inflicted on Egypt, Pharaoh had said:

In other words, they were saying that this is “an act of God”.

The lesson being taught was that He was the God of the Hebrews. From the fourth plague onwards the Israelites were excluded from the plagues of affliction. God was concerned for their deliverance – he wanted them all to leave Egypt together.

Therefore, Pharaoh slowly learned across the ten plagues about the power of the Lord, and the determination He has that His glory should be declared in the people He had chosen. This determination is expressed in His memorial name (refer to the article “The bush that was on fire but didn’t burn up” for more about the memorial name of God).

God’s salvation – Not a Right but of Grace

As we learned in the verse quoted above (Exodus 4:22), God saw Israel as his son, his firstborn. But was Israel aware of this special relationship? They learned about God as the plagues were inflicted. They realised that they were saved from the affliction of the plagues and therefore were in God’s favour. They saw that the Egyptians suffered with the plagues but from the plague of the flies and onwards they avoided them. They realised that because they were the people of Israel that God was with them. But God needed to teach them that being saved was not a right but rather was of grace. They had to see the power of God both in judgment and salvation – this was clearly shown in the last plague and the Passover (see section below).

They were called to have a covenant relationship with God – they would be His firstborn son and He would be there father. God was inviting them to obey Him and, as a loving Father, He would be there to watch over them. But there was also a threat that disobedience would lead to affliction. In Egypt there was condemnation but in the land they were going to there would be salvation. They just had to obey God and keep His commandments. God’s salvation is not a right but is rather by Grace.

The Passover and the tenth plague

God was determined that the tenth plague would make Pharaoh obey Him.

The tenth plague would lead to the Israelites being released from slavery and allowed to leave Egypt. In this plague, the first born of each family in Egypt would die but the people of Israel would be spared. But to be spared, the Israelites had to do something. The thing they needed to do is known as the “Passover” and it is recorded in Exodus chapter 12. Each family (or group of families) had to choose a lamb without blemish. At the appointed time they were to kill the lamb. They were to then sprinkle the lamb’s blood upon the two side posts and on the upper door post of their house. During the evening they were to remain inside the house and eat the roasted lamb. They were to have everything ready to depart immediately.

While Israel was doing this, the angel of God passed through the land of Egypt. The blood on the door was a sign that the family inside had slain their lamb. The angel (who was sent to destroy the firstborn) would pass by the house if blood was seen on the door. The houses in Egypt that had no blood upon their doors would suffer the terrible punishment of the death of their firstborn. This applied to the first-born of Pharaoh to the first-born of the lowest in the land.

For Israel, their time of deliverance had come. They gathered together their possessions including their flocks and herds. During the evening of the Passover, Pharaoh asked for Moses and Aaron to come to him.

Israel were saved and allowed to leave Egypt because of the blood of the lamb. It was to be a memorial to them.

Christ – the Passover for believers

What took place on that night in Egypt would point forward to the work of the Lord Jesus Christ in the future. Jesus was referred to as the Lamb of God.

It is through the shed blood of Jesus on the cross that believers are redeemed.

The apostle Paul makes the direct link between the Passover on that night in Egypt and the Lord Jesus Christ.

For more information about how the shed blood of Christ delivers baptised believers, please read the article “Who is Jesus Christ?” in the Bible Fundamentals series.

The ten plagues brought havoc to the Egyptian people. God sent plagues against Egypt because the Pharaoh and the people refused to listen to Him and continued to treat His people, the Israelites, badly. In the modern day, Egypt is a symbol of the World. This World rejects the Lord God and refuses to acknowledge Him and obey Him. As the time of the end approaches there is a great fear as to what the future will bring.

However, those who accept Christ will find peace and will realise that there is a coming deliverance.

In the days of Egypt (at the time of the ten plagues), the people were fearful and worried, whilst in Goshen (where the Israelites lived) there was the knowledge of the coming deliverance from Egypt. The people of Israel felt a great relief. It is the same today, there are those who do not know the will of God, and there are those who do know His will. Isn’t it better to be amongst those who do know His will? For they look forward with confidence to what the future will bring forth.

The Jews living in Persia are saved from complete extermination – Esther 9:1 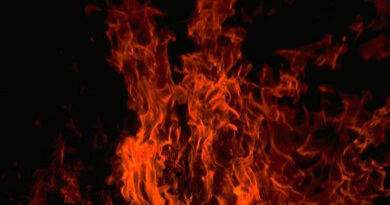 The bush that was on fire but didn’t burn up.–Exodus 3:2