The mustard is a shrub-like plant which grows wild but can also be cultivated. The shrub’s flowers are yellow and, as a result, a whole field of mustard plants can be a pretty sight.

The seeds of the Mustard are small and round. The size of a Mustard depends on the plant variety. Some varieties can grow to two metres in height whereas some can reach ten metres. In Israel the Mustard Trees can grow to 3 metres (10 feet) in height.

Therefore, we have a very small seed eventually growing into a tree of 3 3 metres (10 feet). The small dimensions at the start can grow to something of an incredible size.

The Mustard in the Bible

The Mustard seed is only mentioned in the New Testament where it is referred to five times. It is used to teach two separate lessons:

In this article we will consider the mustard seed and how it is used to illustrate the greatness of the coming kingdom of God.

A parable about a mustard seed

In Northern Israel there is a large lake known as the Sea of Galilee. Early in the first century Jesus traveled to the area around the lake and one day went down and sat beside the lake shore. There were people there who wanted to hear him teach. So he told them a story (a parable):

Back in the first century, Jesus with his small band of disciples travelled across the Israel countryside telling whoever would listen of God’s plan to create a mighty kingdom covering the entire earth in the future.

And that same man who, back in the first century, taught of this coming kingdom will now be King over the entire kingdom! The kingdom will cover the whole earth and every person on the earth will say that Jesus Christ is Lord! The small mustard seed has grown into a large tree!!

So we can see that this simple story of the Mustard seed perfectly explains what God’s new world will be like. Jesus was predicting the fulfillment of what had been a theme through the scriptures, that there would be a worldwide kingdom in the future. The mustard seed would take a long time to grow into a tree, therefore, Jesus was hinting to the people listening in the first century that there would be a long period of time before the promise of the kingdom would be fulfilled.

Why choose the mustard seed for the parable?

The choice of the mustard seed by Jesus was wise in order to make the point he was aiming at. Out of all the plants, the mustard was probably the best to show the difference between the first small beginning and the final large result. Other trees such as the larger ones like the oak or the cedar would not have illustrated the lesson as well. In addition, the Mustard would have been well known to people as it was seen in many places.

The Mustard tree branches – a place for the birds

This was not just stating a fact that birds like the mustard trees to build their nests. It was also intended to teach the listener (or reader) extra information in relation to the parable.

This parable has a similarity to a reference in the Old Testament. King Nebuchadnezzar had a dream of a tree:

The tree in this dream represented the king himself and then his kingdom. In the shadow of the tree there were many peoples gathered together. In a similar way, in the future kingdom referred to in the parable of Jesus, there will be many people across the world gathered together under Jesus as King.

The kingdom of God

As we have seen, the Mustard Tree represents the future Kingdom of God. Ezekiel chapter 36 describes this coming Kingdom. This is what Ezekiel says at verses 35 to 38:

In the kingdom, the people of Israel will obey the Lord their God. They will glorify their creator. The whole world will know that God is all-powerful.

Jerusalem will be the capital of the kingdom and will be recognized as such by all nations. The prophet Micah wrote these words in chapter 4 and verses 1 to 5.

Christ will reign with the saints over the mortal population. He will cleanse the earth of sin and death. Finally, Christ will hand the kingdom of saints to God.

Jesus started out as a carpenter in the town of Nazareth. His beginnings were small. Yet, he commenced the preaching of God’s message. This preaching enlightened men and gave them hope for the future. The message reshaped their lives so that they may be ready to take on leadership roles in the kingdom to come. The apostles were an example of this.

The parable of the Mustard seed makes it clear that despite opposition in the world, nothing will stop God’s purpose. Nothing will prevent Jesus becoming King over the earth in the future kingdom.

The parable of the Mustard seed given by Jesus is a revelation about himself and the future kingdom over which he will be king.

Every human being has the opportunity to be in this kingdom that is promised for the future. They need to firstly believe in the Gospel, secondly get baptized and third live a life of obedience to God following the example of His son, the Lord Jesus Christ. They then have the opportunity to be part of this future great kingdom as represented by the Mustard tree. 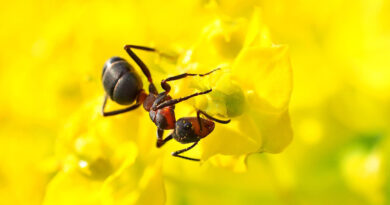 The Ant – a lesson to be hardworking and diligent in life

The Mustard seed – growing our faith

The sheep – needing guidance from the Good Shepherd